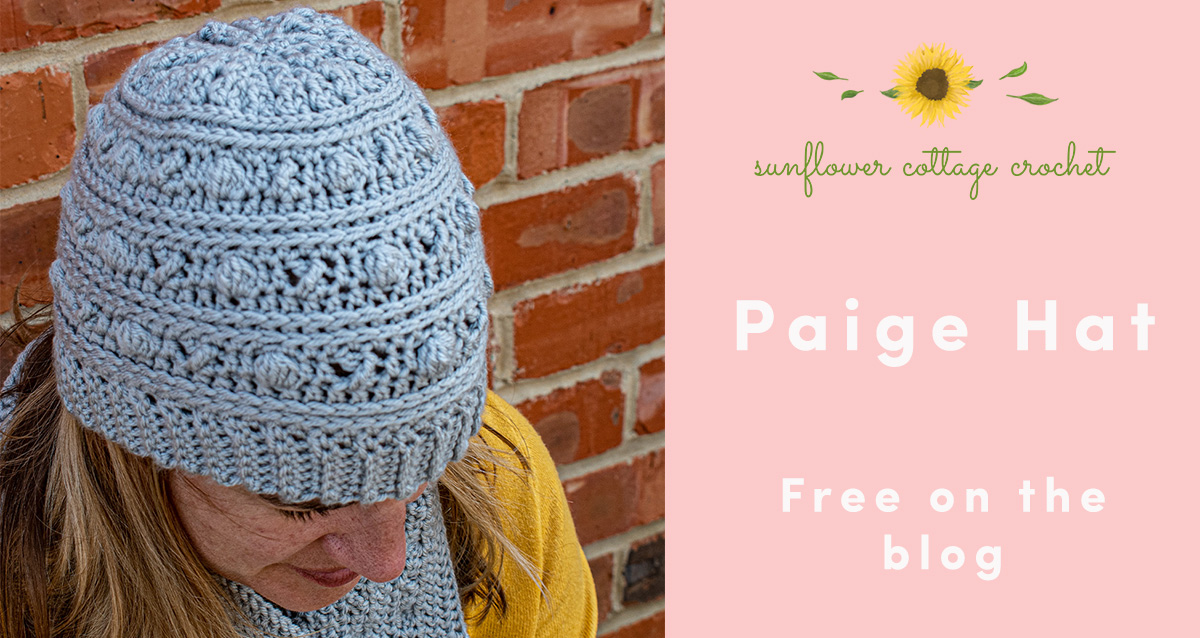 The Paige hat is a great textured beanie and was actually the FIRST Sunflower Cottage Crochet pattern ever designed almost 4 years ago!

Golly, four years reads like it was a long time but I feel like it was only a few months ago!

Anyway, I thought it was about time this pattern got a bit of a loving re-vamp and was made free on the blog.

Inspiration behind this textured beanie

The Paige Beanie was the first pattern designed in what I call the Paige Collection. There is also a baby blanket, baby bandana drool bib, and burp cloth, a toddler scarf and a triangle shawl in the collection. If you want too heck them out I have a round-up post with them all here.

The first Paige Beanie was sweet, but it wasn’t getting the love that I think it deserves. I have been wanting to re-work it for a while and tweak a couple of bits in the pattern. I have learned so much since this pattern was designed. And I wanted to show it off at it’s best.

The use of the popcorn and crossed DC stitches remind me of hugs and kisses.

Construction of the design

The Paige Beanie is worked from the bottom up so that you get that fabulous ribbing at the bottom.

You also work this one in the round. There is no seaming and no sewing other than to close up the top of the beanie when you are finished.

The use of the camel stitch (also known as the third loop half double crochet in US terms) adds that extra pop of texture.

When I re-did this one I decided to add a couple of sizes to the actual pattern. The original was written for only one size. Now it is written for adult small, medium and large!

Do you think I should add children’s sizes?

Me being me, I couldn’t pass up the opportunity to design a matching cowl for this one! The cowl will be released very soon (next week). So be sure to check back!

And don’t forget to tag me in your Paige hat makes on social media!

To create your own Paige Beanie you will need between 180 and 220 yards of #4 weight (aran) yarn. I used some Women’s Institute aran that I had lying around from a previous project. It is 100% acrylic and has a sheen that I think makes the texture pop a little more. But you can use any #4 weight yarn such as Paintbox Simply Aran, I love this Yarn or Yarn Bee’s Soft secret.

Get the PDF pattern!

You can find the ad-free PDF Pattern for this one in all of my shops:

**Please note, if you are here for the All About Fall Event you CANNOT use these buttons – you must use the special event button further down the page! The free PDF Pattern is NOT available via my shops!**

Are you Ready For the Pattern?

Special Stitches in this textured beanie:

FPDC:      Video here. Yarn over (yo) and insert your hook from front to back between the posts of the first and second double crochet of the row below, and then from back to front again between the posts of the second and third stitches.The hook should now be positioned horizontally behind the double crochet that you’re working around. Yarn over and draw the yarn around the post of the stitch.You now have 3 loops on the hook. Yarn over and draw the yarn through the 2 loops on the hook, twice.

Yarn over (yo) and insert your hook from back to front between the posts of the first and second double crochet in the row below, and then from front to back again between the posts of the second and third stitches. The hook should now be positioned horizontally in front of the double crochet that you’re working around. Yarn over and draw the yarn around the post of the stitch. You now have 3 loops on the hook. Yarn over and draw the yarn through the 2 loops on the hook, twice. You’ve made one complete back post double crochet (BP dc).

YO twice, insert hook into indicated st and pull up a loop, *yo, pull through 2; rep from * twice more when all loops are worked off.

This means that you work into what’s called the back loop of the top of the stitch only, instead of going into both loops.  Video here.

Step 1: To make the band, join beginning round and final round (ends) together by slip stitching the back loop of the ending round to the front loop of the first round together along each stitch to the end.

NOTE: remember that the Ch1 sts after the bobble stitch do not count as a stitch so be

sure to skip those!

Rnd 17: Begin top of hat: ch2, fpdc around first post and next post, BPDC around next *fpdc in next 2 sts, bpdc next; rep from * around, join to first fpdc with a ss.

Note, you may not get a full repeat at the end of your round for sizes small and large. That is OK!

Rnd 18: Ch2, fpdc2tog around the first 2 posts from previous round, bpdc next, *fpdc2tog, bpdc next; rep from * around, join to first fpdc2tog with a ss.

Note: for size large you will end with 2 bpdc stitches as there will be 1 extra stitch for the repeat.

Rnd 19: Ch2, fpdc2tog around, (ending with a single fpdc for the small and medium sizes), ss to first fpdc2tog.

FO, leaving a long tail for sewing the hat shut.

To sew shut, weave the end with a yarn needle back and forth through each stitch around, pull tight to close.  Weave in ends.

On Wednesday 24th August only you can grab this textured beanie pattern as a free pdf download.

**Please note this is a direct download from site and so the shop buttons will not work!

There are 2 ways of joining this event. The first is to purchase the bundle.

You can get all 30 Summer patterns for one absolutely amazing price of $12.99! This is a great option if you may have missed a couple of patterns during this event.

Check it out by clicking the button below.

Of course, if you would just like the free PDF Pattern today just click the button below. It will take you to an about me page. The file is at the bottom of the page. Under the file is a black download button. Just click that to save the pattern to your device!