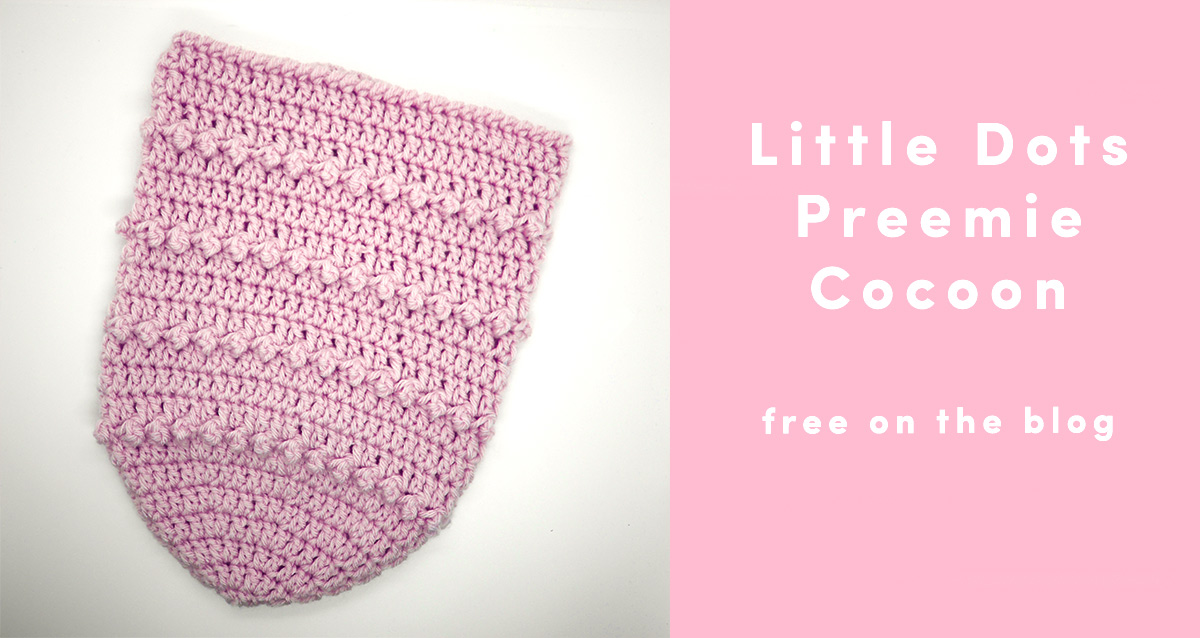 The Little dots baby cocoon pattern has been waiting in the wings for its release for a while now! It is one of a set of 6, with the last couple releasing soon.

I really like making all 6 designs they are perfect for my annual Crochet Preemie Challenge.

My daughter, Jorja, was a preemie, and I really wish she had had a cocoon while in the hospital that I or someone else had crocheted (or knitted) for her, but at the time, I just was not skilled enough to write my own pattern and I could not find any books at all, nor could I find websites that had one I felt like I could make.

So Jorja just had lots of lovely blankets that I made her.

The little dots stitches are actually triple crochet stitches “smushed” when using a much smaller (single crochet) stitch following it.  This made the stitch “pop” out and create a “little dot” affect.  I really liked it!  There is also a  Little Dots Bib coming soon too!

You will love the simplicity of the pattern as well as how pretty it looks.  In solid colors or even as a color stripe, it’s beautiful either way.

This post contains affiliate links at no extra cost to you!

I originally used Hobby Lobby’s I Love This Yarn in a super duper light blue/gray (I cannot remember the color name, sorry!) but any very plush acrylic #4 weight medium/worsted/Aran yarn will do.  I’m a super big fan of Mary Maxim’s Starlette Sparkle yarn!  I’ve done lots of projects with the gold color and the white with the gold sparkle in it!

I also used a 5mm hook—my Furls Odyssey in peach

The pattern is written in US terms and the abbreviations I used are as follows:

*—indicates where the repeat starts

Increasing or Decreasing the Size

In the baby cocoon PDF pattern, I include how to do the math to make your cocoon larger or smaller to custom fit the baby you’re making it for.   The pattern here on this post is a preemie size, especially for the Preemie Crochet Challenge 2022.

This baby cocoon pattern (along with instructions on how to increase the size of your cocoon), is in all of my shops. You can find it at:

Rnd 24–      Ch1, crab st in first and in each st around (please read the instructions for crab stitch).  FO and weave in ends.

I would LOVE it if you tagged me in your preemie baby cocoon makes on FaceBook or Instagram.

Another way for you to stay in touch with me is to join my newsletter.

The general newsletter only goes out once (maybe twice on special occasions) a week. The Events and Cals newsletter goes out to let you know about the patterns included in the events that I am a part of or hosting as they become available. For the most part that can mean daily free or heavily discounted pdf pattern notifications etc direct to your inbox.

From June 8th – 30th 2022 this pattern will be part of my annual Preemie Crochet Challenge.

This year is going to be a little different as there are 2 ways to take part:

Prefer not to get the bundle?

That’s ok! If you do not have the coupon code for this pattern grab it by clicking the round-up button below then come back and click the button to get your Free PDF Pattern!